UCL ROUND UP: Manchester United,  Inter dumped out of Champions League 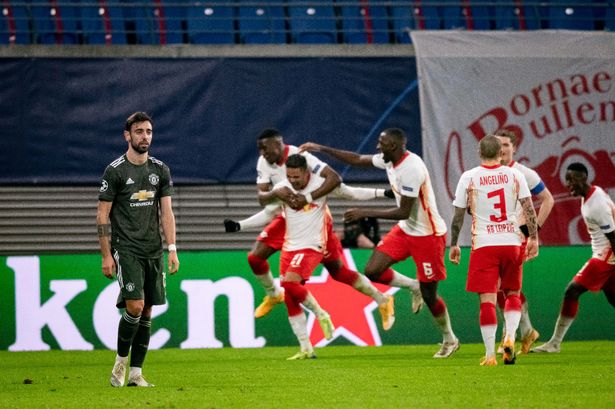 Manchester United and Inter Milan have improved their relationship in recent years after the Serie A club went shopping at the Red Devils to sign the likes of Romelu Lukaku, Ashley Young, and Alexis Sanchez.

However, after Wednesday’s matches in the UEFA Champions League signaled the end of the 2020/21 group stages, both European giants have continued to strengthen that relationship further after they were dumped out of the Champions League respectively.

The SociaLiga’s World Football recaps some of the high points of matchday six in Europe’s elite club competition.

The Red Devils left for Germany needing just a point to book their place in the Round of 16, but in the opening 15 first minutes of that game, United’s hope was not just dashed but totally ended by the Angelino inspired Red Bulls.

A beautifully taken low drive by the left-back to put Leipzig ahead just two minutes in before setting up Amadou Haidara to double the lead 11 minutes had the hosts on the driving seat.

Substitute Justin Kluivert made it 3-0 after the break and with 20 minutes left to play, but the drama wasn’t over yet as United, known as the comeback kings, lived up to that tag.

Two late goals, a Bruno Fernandes penalty (of course), and a Paul Pogba strike saw the Red Devils put up an incredible fightback but this time, it was rather too late.

Despite scoring the most goals in their group (15), Manchester United would be disappointed as they dropped to the less glamorous Europa League.

Neymar leads PSG to the Top

After a rather poor start to their UCL campaign,  PSG are through to the last 16 as Group H winners thanks to an inspirational performance from their Brazilian star, Neymar.

After a racism row abruptly ended their matchday six encounter against Istanbul Basaksehir on Tuesday, both teams took to the pitch on Wednesday to complete the game with Neymar and Kylian Mbappe the standout performers in a 1-5 win for PSG.

Neymar helped himself to a hattrick, with a brace in the opening half before he completed his historic performance in the 50th minute with his third of the evening and PSG’s fourth, after Mbappe, who had a brace, had put them 3-0 up.

With the goals on Wednesday,  Neymar became just the first player in Champions League history to score 20 or more goals for two different clubs.

His hat-trick took his tally for PSG to 20 goals and 12 assists, while he netted 21 goals and provided 15assists during his time at Barcelona.

While the Frenchman has come under heavy criticisms in recent times due to his form and performance, on Wednesday night, Karim Benzema became the darling of Madrid fans once again after he helped Los Blancos avoid Europa League.

Zinedine Zidane and his team went into the game third in their group and needed nothing but a win to guarantee them a place in the next round no matter what happened elsewhere or risk dropping to the Europa League.

And in the opening 32 minutes, Benzema netted a brace as the 13th time Champions League winners held on to defeat a stubborn Borussia Monchengladbach 2-0 at the Bernabeu to seal their place in the round of 16 as group winners.

Meanwhile, in the same group B, Inter Milan and Antonio Conte have ended their journey in Europe this season after a goalless affair at home to Shakhtar Donetsk. All they needed was a win, but a toothless display means it is the end of the road as they finished bottom of the group on six points from six matches.

The Italian outfit also scored just 7goals in six matches, an average of just over 1 per game.

So, who are the other heavyweights who failed to progress to the next round of the Champions League? Former winners, Ajax Amsterdam, who also have dropped to the Europa League.

CONFIRMED: These 8 teams go into Monday’s round of 32 draw ✅#UEL pic.twitter.com/jlo8UvuLFT

Tottenham Should Be Regarded As Title Contenders
Shocking Outcomes From The Weekend’s Football Action
We use cookies to ensure that we give you the best experience on our website. If you continue to use this site we will assume that you are happy with it.Ok